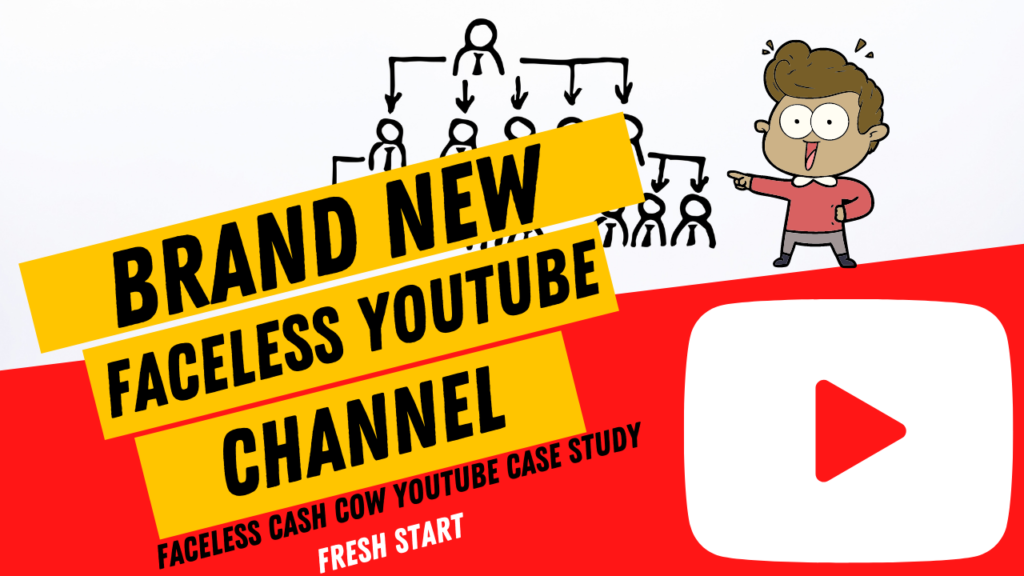 I’ve tried to do a case study before on faceless cash cow YouTube channels however my costs are so engrained in the website content it becomes a pain to really document properly and the niches involved were time-consuming. I do have a couple of profitable channels that are still running but I wanted to start a new case study to document it clearly.

And this one is a little different.

What Is a Cash Cow Channel?

Firstly, let’s make sure we’re on the same page here. What is a faceless cash cow channel? Pretty straightforward, it’s a YouTube channel that doesn’t show your face and exists to generate some cash flow.

Usually, these channels are outsourced. You can outsource everything from scriptwriting, video creation and voiceover artists. I like to run channels like this to support existing websites and when they start generating more with ad revenue than they cost to outsource they’re just scaling themselves for free.

This Case Study is a Little Different

This case study is a little different.

My other channels are outsourced. They’re mostly in info niches and need a budget to build and grow but I’ve no interest in doing it myself.

For this case study, I stumbled into something a little different. It’s a trend that suits the faceless YouTube style, it’s potentially a pretty good RPM and the content seems pretty easy to produce.

This kind of trend isn’t something I would normally look at. I like consistent growth so I know the niche isn’t going to vanish by the time I get established in it.

And that’s certainly a risk here , however, it could (potentially) become an evergreen niche and the majority of content producers in the niche are hobby bloggers. I can see a potential way in, I can see it becoming a good cash-flowing asset and (best of all) I can create a month’s worth of content in under an hour or two.

If we can get an established channel in the niche it should be an easy asset to manage. A few hours once in a while for a hands-free cash flow and the RPM might well be better than my existing cash cow channels.

There’s a potential problem, however.

Normally, I like to start a channel in a niche I can get some traffic for. Usually, I’d like some organic search traffic, an email list or some social traffic so my channel gets a spike of views and subscribers early on.

The Digital Assets Lab channel is a fair example of this. It’s more of a hobby blog so I don’t exactly push it hard but you’ve probably found me from a forum or Reddit. For the ones that found me through YouTube – a good part of that is because I actually promoted the channel.

With this new channel, I can’t really do that. I don’t have anything established in the niche and it would be expensive and time-consuming to try and rush it.

Because the niche is growing so quickly at the moment, my plan is to just start. The majority of the competition are hobbyists so consistent publishing and following the popular trends might give me enough of a push. I do have a few ideas on how I might speed things along a bit.

Everything I needed for the channel cost less than $100. Probably the cheapest channel I’ve ever started.

Spent about two hours skimming through the popular channels to see what seems to work. Another hour to get things set up and I was ready to start creating content. The videos themselves are easy to do and I can batch them together quickly.

With nothing but the algorithm to bring views, I didn’t really know what to expect but the first couple of days showed the first video doing well.

It’s not the fastest-growing channel I’ve ever seen but for just publishing easy content it’s hard to complain. The watch time is pretty good, and subscribe and engagement rate is looking good so far.

We’re being ranked for the main niche keywords. Not right at the top but on the top 10 or so, plus we are being suggested by related videos in the niche. That’s a good start especially considering we’re really relying on YouTube to push the channel.

You’ll see a little traffic from the short shelf on the traffic source – I posted one but I don’t know if I’ll continue that. It’s potentially a way into the niche as most of the competition isn’t doing it but I don’t want to screw with the watch time metrics for the longer videos.

I don’t have any existing traffic for this niche so I’m a little out of my element here. I have a couple of thoughts on growing the channel quicker:

The plan for this case study is pretty straightforward.

I’m going to publish a couple of videos a week for the first 30 days and try to speed things along with a little promotion and see how it goes. We want to see the growth trend continue so we can get some ads on the channel and I’ll update when interesting things happen.

I haven’t fully decided if we’ll be revealing the channel or not but I don’t want to see the metrics getting screwed with by you guys to start with so I’ll hold off on that for now at least.